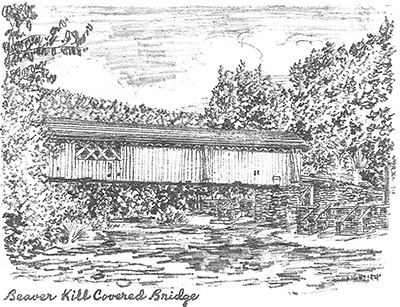 The mission of the FOBC is four-fold:

1)  keep the membership informed about the status of issues of interest to the community, particularly governmental actions proposed for the valley and construction/new develpment projects along and/or affecting the River.  It has not been the position of the Friends to take poistions on sensitive issues, but to meaningfully inform the membership;

2)  collect and preserve materials relating to the history and lore of Beaverkill River Valley;

3)  create a written legacy to preserve the heritage of our valley for generations to come.  To date we have published two volumes of stories, and a heritage edition, and

4) to interact as a local constituency with governmental agencies and private organizations that have an impact on the area.

The purpose of the website is to further the mission of the FOBC by providing an historical archive of the material included in our three published volumes, and by keeping residents informed about issues that affect the community.  In additon, we have created an online calendar page to announce events in Roscoe, Livingston Manor, and other nearby communities, as well as a writers page where we have begun collecting stories and poems concerning the Beaverkill River Valley and life along its banks, with the intention that we might eventually publish a fourth volume of collected stories.

The FOBC began as a formal organization in 1998, although it had gestated for at least a decade before that. Several groups of long time valley residents had previously organized for special purposes, such as the repair of the Beaverkill Church, and the maintenance of roads along the river, and there was increasing discussion on all sides about a variety of local issues. At the same time, a wider, and younger, population had coalesced around an annual end-of-season tennis tournament, originally hosted by Michael and Winsome Macintosh on whose Campsite Road property the court was located. The outcome of the exquisitely seeded matches occasioned an awards ceremony and get-together attended in each succeeding year by an increasingly large number of players, watchers, gossipers, and party-goers. The awarding of the Steiff beaver-on-a-board trophy required a speech that soon evolved into valley announcements and discussion of local issues.

It should also be recorded here that there had been a significant demographic change around Beaverkill in the early ’70s when, during a relatively short period, a number of older residents left or died, their places and, frequently, homes taken by an incoming group of thirty and forty somethings and their children, numbers of whom had known each other in the city. Among the early members of this population was the group who gathered to build the cooperative tennis court that became the venue for the annual open tournament. These new residents, mostly summer visitors, were enthusiastic about their new homes in the valley, conservation and preservation oriented, and community spirited almost to a fault.

Into this receptive environment Patricia Adams, who lived closest to the Bridge, introduced a letter in January of 1998 asking for an expression of interest in an organization that would deal with community preservation issues, initially the picnic area of the Campsite, the Beaverkill Church, the Covered Bridge, and the Iron Bridge. Response was immediate, and the association was organized that year as the Friends of Beaverkill Community. Patricia Adams became the first president, serving until 2004 when she resigned to become the editor of volume II.

Meanwhile, Volume I had been published in 2003, with a second printing in 2005.  Volume II appeared in 2006, followed in 2007 by the Heritage edition which included all the material from Volumes I and II, plus an additional photos section.  The Heritage edition was reprinted in 2008.

In 2000 the Friends, through Mike Teitler, were incorporated as a New York not-for-profit corporation primarily dedicated to preservation, and quickly received qualification as a tax exempt organization under the Internal Revenue Code, permitting contributions to be made on a tax deductible basis. In addition to holding a general business and social meeting at least annually and committee meetings throughout the year, the Friends publish, update, and provide to their dues paying members a directory for use within the group. An extensive website, created by Colin Foote and currently maintained and enlarged by Virginia Lawrence, records the doings of the Friends and contains numerous photographs and some items not included in the two histories published by the Friends as well as reprints of some articles from these volumes.

In spite of a universal feeling for Beaverkill and its history, the Friends are frequently not of one mind on local issues. Preservation can controvert improvement, utility can contend with history, private and public use can be at odds, and the interests of permanent residents are not necessarily the same as those of summer visitors. The approach taken by the Friends has to date been primarily to keep the membership informed about the status of issues of interest to the community, particularly governmental actions proposed for the area and any hearings and related requests for comment, thereby enabling members to make their feeling known on a timely and effective basis. Officers of the Friends and committee members try to attend all relevant governmental meetings in order to keep the membership up to date. They do not assume positions on behalf of the entire group and indicate that their comments reflect their personal positions only. However, the regular presence of representatives of a broad based and well informed local group shows an interest and potential political strength that, the Friends believe, has helped to generate favorable governmental actions, among other things, in connection with the two bridges and the campground. Debate among the Friends themselves is frequent and encouraged.

As an early act, the Friends established a Heritage Committee in order to further its preservation mission by collecting and presenting materials relating to the history and lore of Beaverkill. These volumes are part of the result.

In 1998 when we formed Friends of Beaverkill Community we felt strongly that the word “Community” be a part of our name. Part of our growing sense of community were the records of valley events we found in boxes left in attics in the old houses we bought, old ‘flyers’ about the campsite or hotels in the area, some of which had been printed in magazines or newspapers and pictures left behind by previous owners. There were also a few individuals who had written out their memories.

Through existing material and interviews, we saw an opportunity to give voice to earlier members of this community and create a written legacy that would be a part of our valley for years to come. Our goal was to keep the individual “voices” of the various pieces and create a book which gave a bit of the flavor and atmosphere of Beaverkill over the past one hundred years.

There was a great deal of enthusiasm for both the writing and then for the book itself, and in the fall of 2003 the Friends of Beaverkill Community published Stories of the Beaverkill Volume I. We soon sold out our first edition of 200 copies and decided that not only would we have a reprint of Volume I, but we saw that we had enough material and willing volunteers to start on a second volume.

Volume II, which was all new, was the result. Like the earlier work, it is a compendium of writing and photos that focus generally on the area and people in that portion of the lower Beaverkill Valley whose sentimental hub is the Beaverkill Covered Bridge. As an oral history, it goes back no further than the unwritten stories and traditions that have been passed on to and captured by the authors herein. Thus, the earliest material touches lightly on the sunset of the farming days and the beginning of permanent summer residence by visitors around the turn of the last century, and the latest ends, generally, with the vibrant social scene of the ’50s and early ’60s. In order to place the valley culture in a broader context, some historical notes from farther afield are included, such as the fine short history that appeared in the commemorative yearbook published in connection with the dedication of the new Livingston Manor High School in 1939.

Many voices are heard herein, and the close reader may note that in a few cases they do not entirely agree and that their recollections of history may not entirely accord either with each other or with the official chronicles.

To better show the temporal and geographic bounds of the volume and for easier reference, there have been included a map of the area showing where many of the principal characters lived during the times in question, together with a timeline showing principal landmarks of Valley history.

Volumes I and II: Heritage Edition

In the event, Volume II essentially sold out through subscription before its printing, and we came to believe that this latest edition, which contains both earlier volumes, together with a collection of photographs from the Beaverkill archives, should be produced not only to keep the books in print and available to Friends and to future Friends, but also to preserve the heritage of our valley for generations to come.